Coach Brown named the 2020 Volleyball England Coach of the Year! 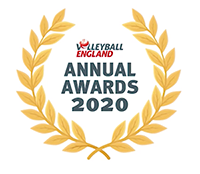 This was a team effort, and the work that has contributed to this award sets up the volleyball programme to expand and progress as soon as the sport is able to restart.

Elaine Brown has gone above and beyond to develop volleyball across West Yorkshire through her outstanding dedication and commitment to coaching, promotion of equality and good sportsmanship, and has creatively and methodically made efforts to teach, coach and train players according to their specific needs.

Over this past year, Coach Brown has been appointed to a full-time position working to grow volleyball across the entire GORSE Academies Trust, continued as the Director of Youth Volleyball Development at Leeds Gorse Volleyball Club and as the developmental coach at University of Leeds. Through these roles, she has increased participation by the thousands and shared knowledge of volleyball with staff and coaches across the GORSE Trust and Leeds Club, and has taught volleyball to students across all primary and secondary Gorse Academy Trust schools, all junior Leeds teams, the Yorkshire Volleyball programme and even at University of Leeds. 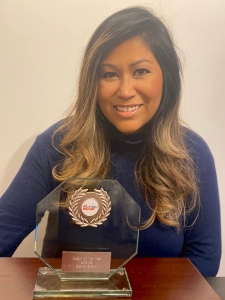 In primary academies, Elaine has adapted lessons according to each age groups’ needs to build volleyball related motor skills, basic techniques, footwork, functional movement and game play. She has successfully launched after school volleyball clubs at each of the four primaries and has also provided CPD sessions for staff members in each academy so they will be better equipped and prepared to continue promoting volleyball throughout the year. Elaine has been able to recruit talented youngsters through to the club and has provided an opportunity for top students to compete in the Primary Gorse Games.

In secondary academies, Elaine has helped introduce volleyball to all year seven through nine students. She has sparked an interest in volleyball that is flourishing. Each academy now teaches volleyball as part of the PE curriculum and even runs weekly extra-curricular volleyball clubs with 20-60 students per session. Coach Brown also provided several CPD sessions for staff and SCITT members on how to effectively teach volleyball to secondary aged students. Through these efforts and talent identification, we have more juniors coming through to the club than ever before.

The GORSE Trust has also launched a new programme, ‘GORSE Gets Healthy’ in which students are taught and encouraged to live a healthy lifestyle primarily through diet and exercise. As volleyball is one of the three major sports GGH supports, Elaine works closely with this programme to offer extra volleyball focused fitness sessions, volleyball tutorial videos (on GGH YouTube), insightful social media posts and has even created a GORSE Volleyball League in which each academy will form teams per year group to compete against each other throughout the year leading up to the Annual GORSE Volleyball Games (a volleyball competition between all academies).

She is also taking the initiative to develop beach volleyball in Leeds. She is sourcing funding, grants, locations and permissions in an effort to attain sand courts. Fingers crossed for approval on this proposal!

Regarding the Leeds Gorse Volleyball Club, Elaine coached all junior boys and girls for the first hour of every session during the first half of the season in order to educate all junior coaches and ensure everyone was on the same page with technique and skills. The benefit of this dedication and attention to detail was evident in the way the junior teams played this season; each team had their most successful year in terms of development, wins and team unity. Our U15 girls’ team in particular, led by Elaine and Lizzie Carrick, was due to play in the finals round of the National Volleyball Championship competition making this a record for the farthest level a junior Leeds team has reached. Elaine also led the Yorkshire Junior girls programme throughout the year and provided much support for players and coaches. Additionally, Coach Brown has helped build a partnership with the Men’s National Volleyball Team in which the Trust provides a free training venue, and in return the team provides short training sessions for the juniors. This has been a great success, and truly inspires the younger generation to keep working hard and achieve their goals.

To ensure the success of the women’s programme in Leeds, Elaine served as the assistant coach for the Women’s 1st team and made it a priority to aid in the transition of younger players moving up to higher levels of competition. In addition, Coach Brown is the Beginner and Intermediate Coach at University of Leeds and has also helped support the Leeds Beckett Women’s Volleyball programme on several occasions. Next year, Elaine plans to expand volleyball into colleges starting with Elliot Hudson College, so youth in the area will have opportunities to develop and play at every level from primary, secondary, college, university and of course with the Leeds Club.

As Elaine is an advocate for inclusivity, she organised the club’s first LGBTQ+ Open Play Day in conjecture with the Leeds LGBTQ+ Fringe Festival and plans on repeating the event this year (if permitted by government COVID-19 allowances). She has also laid the groundwork to launch a SEND sitting volleyball programme throughout the Gorse Trust and Leeds club to ensure people of all abilities have the chance to play, develop and compete in volleyball.

In terms of growing our social presences, she has promoted the club through Facebook, Twitter, Instagram and YouTube in collaboration with the GORSE Gets Healthy accounts. Her passion for the sport and advocacy to continually grow the sport across Leeds and West Yorkshire is evident. She is truly making a positive impact in the lives of these youngsters and within the local community.